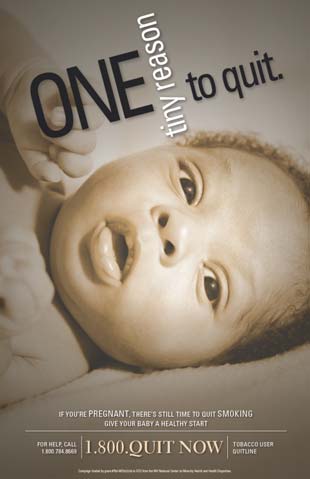 One Tiny Reason to Quit Campaign

Smoking is a leading contributor to low birth weight and prematurity, and these conditions are major risk factors for infant mortality. Many people need help to quit smoking, but they don’t know where to turn for the help. A communication campaign, One Tiny Reason to Quit, was developed to encourage pregnant African-American smokers in Richmond, Virginia to call 1-800-QUIT-NOW for free smoking cessation counseling and support. The quitline is funded by CDC through the Virginia Department of Health, the campaign was planned in cooperation with community partners, and the cost of the campaign and its evaluation was covered by an NIH P-60 grant to VCU.

One Tiny Reason to Quit used a variety of media channels. Its radio spot featured the voice of a child, because we learned from focus groups that a child’s viewpoint resonates with target audience members. Other media channels included bus advertisements, billboards in high-risk communities, and utility bill stuffers.  Trained volunteer outreach workers reinforced the media messages and gave pregnant smokers branded give-away items (e.g., lip balm, brochures, cell phone-shaped tins of mints).
The initial wave of the campaign lasted from June through September 2009. A second campaign wave ran from January through March 2011. Both waves resulted in statistically significant increases in calls to 1-800-QUIT-NOW from pregnant women in Richmond.

The following organizations provided support and guidance throughout the strategic planning process and campaign implementation:

To order creative materials for a One Tiny Reason to Quit campaign in your area, contact: